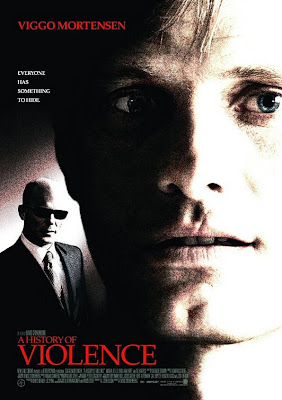 Based on John Wagner and Vincent Locke's graphic novel of the same name, A History of Violence is a rare experience for viewers. No matter how much you think you know, or even actually know, the film still finds ways to shock you with what you were expecting. It is the way it is done that is the real surprise. Using a small town as the primary setting makes a story like this make us question just who is living next door. Viggo Mortensen plays local restaurant owner Tom Stall who has a normal loving family who are respected by all in their small community at Millbrook, Indiana. His family consists of his wife Edie (Maria Bello), teenage son Jack (Ashton Holmes), and young daughter Sarah (Heidi Hayes). When Tom's restaurant is held up by two drifting killers Tom jumps into action, he kills both men showcasing a surprising talent for protecting himself. By stopping the two killers Tom becomes a local celebrity, getting his name in the paper along with interview requests. With a new celebrity  mobsters from Philadelphia, lead by Carl Fogarty (Ed Harris), arrive and seem to know something about Tom that he either doesn't know about or is hiding.

David Cronenberg has made his career of shocking and even disgusting viewers; from his early body-horror films like the disturbingly outrageous attack/tribute to exploitative television,  Videodrome (1983), and his body transformation thriller, The Fly (1986). This film shocks in a more subtle way in every respect. Without the use of extensive visual effects Cronenberg must use much more basic elements to shock with. His response to such a challenge is creating a tension filled attack on emotional restraint and human nature.

Cronenberg's tolerance attacking, twisted ways are as present as they ever have been, but his gruesome, gut-wrenching visual effects are very reserved. I highly doubt anyone thought he would let us off the hook, there are still moments of his trademark visual horror that seems more disgusting and out of place since this isn't one of his gruesome horrors. Saying that this is the film that Cronenberg began his adrenaline pumping ascent to filmmaking maturity would not get any protest from me. Jumping ahead for a moment; the morality study and Russian mafia exploration, Eastern Promises (2007), is where he reached that maturity peak. Now back on track. A History of Violence keeps its emotions bottled up just like Tom Stall. Explosions of extreme violence leave their shock value, while its emotions are quite unstable.

A real inconsistency in the film is the realistic approach to a plot that various moments where all realism is thrown out the window. First a strong point; Ashton Holmes' performance as Jack. His character being able to show real maturity by understanding the situations, but the complexity of the entire situation takes its tole. Now a weak point; Maria Bello's performance as Edie. A character that is always reacting in absolutes. First she is madly in love with her husband, but the moment she figures out the truth she turns against him without a moments hesitation. Then there is a middle moment where she helps him, but that quickly turns into a stir-of-the-moment angrt sex scene that is so abrupt that it loses much of its appeal.

Like in most of his starring roles it is Viggo Mortensen who takes over and drives the film his way. Playing a tortured character with a corrupt past, his facial emotions have never been stronger. As the film unravels his facial emotions are our only way of knowing what he truly feels. Being able to do so much with a character whose dialogue doesn't reveal much is a treat to watch.

To avoid ruining this very strong story of dark pasts and tough decisions I will not risk revealing any vital parts of it. Ed Harris does play ruthless and mysterious mobster Carl Fogarty, as one of the few big name his presence brings an even more menacing feeling to the role. Surprisingly gaining an Academy Award nomination for his brief, but vital, role as Richie Cusack, William Hurt adds much to the effect of the very powerful climax. Unfortunately going into detail about his role would give away to many of A History of Violence's dirty secrets.

A History of Violence is a reserved film when referring to anything by David Cronenberg, but still is able to leave its mark with some more finessed shocks. Strong performances by some big stars including Ed Harris, Maria Bello and William Hurt are a very nice addition to an already well crafted film. Moments of the excessive Cronenberg "charms" can be unfitting, but he shows just why he is such a respected director by tackling a new type of film and doing it very well. As the lead Viggo Mortensen radiates radioactive brilliance as a mysterious and ultimately very memorable character. Josh Olson brings John Wagner and Vincent Locke's powerful source material to the screen with such wonderful simplicity earning him a well deserved Oscar nomination. Here is a film that will leave an impact that will lead to many revisits. 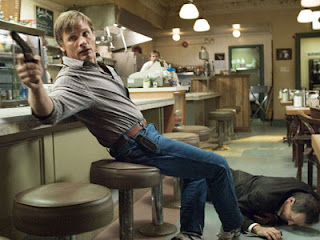