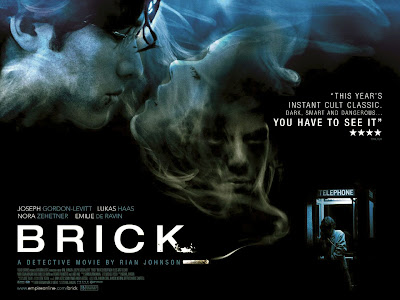 Newcomer Rian Johnson creates a homage of the classic film noirs of the early twentienth century with respect and wonderful plotting. Joseph Gordon-Levitt plays Brendan Frye, a teenager who finds the body of his ex-girlfriend, Emily (Emilie de Ravin), in a storm drain which leads him to go on a dark, violent journey to discover the truth behind what happened to her. Throughout his journey he meets many memorable characters. Already taking the risk of creating, in many respects, a tribute work to film noir, Brick also takes the risk of using teenagers as the characters in its very adult narrative. A narrative that is violent and complex, forcing young characters to make decisions that the strongest adult would hesitate at making.

From the use of very dark humor we are reminded of the ages of the many characters. Authority figures are either non-exsistent or even so slyly moved around by a very crisp plot. One of the more humorous moments is when Brendan is picked up by local drug baron Pin (Luke Haas); when he gets into the vehicle (which is being driven, most likely, by Pin's mother) you see Pin has removed the seats, put in a couch, along with a lamp creating a limo-like apperance. Pin's hot-headed henchman "Tug" (Noah Fleiss) is a very well done portrayal of the many violent uncontrolable 2nd-man characters from older film noirs. Played very well by Noah Fleiss, Tug is one of the more entertaining characters along with becoming a fairly deep one also. Just about every character is a take on a commonly used classic film noir character; Brendan Frye as the protagonist who is only partially involved to the back story forces himself into a violent, corrupted world he could have never imagined before. Brain (Matt O'leary) as the book and street smart friend/assitant who is trustworthy, while also knowing when to keep his distance.

One of the stronger character tributes is Nora Zehetner's performance as Laura Dannon. Laura is a character who is involved with the story from start to finish  due to her relationships with various antagonists and also a, so it seems, brief relationship with the victim and also major conflict of the film. She stays distanced from the story, but always close to Brendan, making her a constant presence. As the sweet ignorant guider turned femme fatale Ms. Zehetner is devilish.

Shot like a mix between a murky film noir and a patient character drama. Using dark depleted colors making the blood stains so much brighter. Set pieces that are gloomy and menacing giving off a feeling of impending doom at every turn. Stylized without going style crazy, a calm pace with moments of adrenaline pumping despersation. Rian Johnson takes this little film and shows off some outstanding talent that would have made him a superstar in the 40s-60s.

A proper film noir tribute can't be done right without also using the language of them. It is a known fact, along with an abvious one, that writer/director Rian Johnson was a die hard fan of the film noir genre. Many pieces of Brick's dialogue is taken, and or inspired by the hard-boiled detective novelist, Dashiell Hammett.  From his experiences and knowledge of them we get a crisp script to remember and even quote.  "I've got knives in my eyes, I'm going home sick" says our protagonist Brendan Frye as he caps of another day, and night, of searching through the dark underground of Brick's the suburban California setting. "You better be sure you wanna know what you wanna know" says Brendan's tricky back-stabbing ex-girlfriend Kara who obviously knows more than she tells. Slick, clever lines like those are what takes this film's over-used, cliched characters and brings fresh new life into them.

For a debut feature Rian Johnson sure does create something fresh and special with Brick. Joseph Gordon-Levitt's powerful deep performance that is memorable and hypnotizing. A character with an outline so bold and over-used that is given characteristics so fascinating along with a corrupted innocence that drives this dark menacing film. Seeing characters that have been being used for decades is not the most appealing with a plot that battles to keep away from becoming distasteful and exploitive. Which it achieves at avoiding due to Rian Johnson's slick fantastic script, crisp, brilliantly paced storytelling, and bleak visuals that would make any film noir aficionado feel obligated to praise. 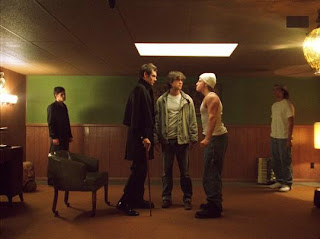 Posted by AdamMoody at 3:46 PM