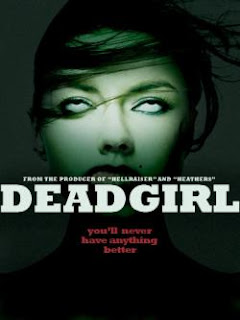 When rebellious teenagers Rickie (Shiloh Fernandez) and J.T. (Noah Segan) discover a naked woman (Jenny Spain) who is barely "alive" and chained to a table deep in the tunnels of an abandoned mental hospital, their lives change forever. Rickie wants to release her, but J.T.'s twisted ways come to a head when he decides to keep her as a sex slave. Their slave is nicknamed "Deadgirl" after J.T. realizes that this mysterious women cannot die, and thus their lives and the lives of everyone that get in their way are forever changed also. And there is the outrageous sickening idea of the maliciously vile film, Deadgirl. Showing us the cliched, horny teenagers and giving them a sadistic and evil outlet for their sick sexual pleasures, only a truly troubled mind would want to make an idea like this into a film.

So, who is to blame for this film? Trent Haaga wrote the script which makes him responsible for the idea, plenty of the blame must also be put on directors Marcel Sarmiento and Gadi Harel who resorted to show off there talents with this trash. I found myself feeling more and more sick as the film went on, nudity that will appeal to only the sickest of minds. Films like this have no taste or artistic justification, they just drift into darker reals of distaste.
Ironically, as teenaged males are represented as being sexually obsessed to violent extremes, I see there being some very horrified reactions to the representation of females. How the film ends (Don't worry, I wont spoil it) may come off as an intention to show young girls as being sexual objects. It is very easy to interpret Deadgirl as viewing women in a very horrific way, but I say just don't look that much into a film that is atrocious no matter how it is perceived. Don't fall under the spell of looking too much into everything, there is no hidden meanings here, just a unfortunate idea that snuck into production.
There are some very decent performances, Shiloh Fernandez is an attractive lead with Noah Segan fitting perfectly into his sadistic role. Unfortunately no performance can save a film that doesn't allow those performances to shine. Violence is the selling point, and prices are very high. I wonder what Jenny Spain had to do to get her role as the "Deadgirl." Her role has the requirements of being naked the entire duration, having different men perform simulated thrusting while she lies there motionless, with her real acting challenge being biting people. I always feel bad to see bright young faces being put in films that take their talents for granted leaving them in empty roles and giving them a disgraceful film to their credit.
Deadgirl is a film that tries to be a study on some sort of dark part of human nature that exists in teenagers, I can easily see that, but what I don't see is anything beyond an exploitive portrayal of teenage sexual angst. While Trent Haaga is already a respected name in underground horror sub-genres, I do not expect to see anything respectable from either Marcel Sarmiento or Gadi Harel. I see a very obvious future for Deadgirl with audiences; it will become a film so detested that a cult following will be a very gradual transition. Modern audiences have a real fetish for gruesome, rejected, films, a permanent rebellious gene engraved into the DNA of this generation. Another film that will have the exact same kind of impact is the Dutch, mad-scientist, experimentation film Human Centipede: First Sequence (2010) which I have equal feelings of loathing for . Both give of the deceptive feeling of having some sort of social relevance when really they attack society more than represent them. 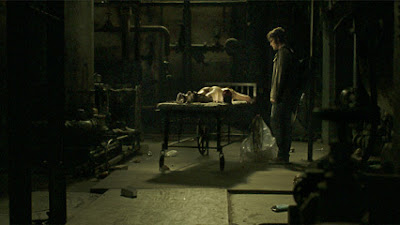 Posted by AdamMoody at 3:36 PM