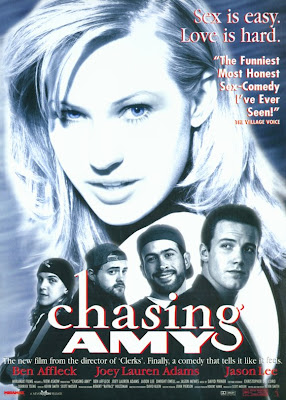 Kevin Smith's Chasing Amy has sets and conversations/discussions/rants that resemble a rauncy sit-com with the emotional understanding of a gripping character-drama. Studying the varying forms of love and friendship in a brilliantly understanding way we can all relate to. Smith jumped onto the scene with his film Clerks (1994) which follows two store clerks through their day-to-day exploits which mostly consists of banter about sex, drugs, and normal social issues which Smith has mastered simply by living life and observing. Mallrats (1995), Jay and Silent Bob Strike Back (2001), and Clerks II (2006) are all films that were very hit-and-miss. His witty humor that incorporates everything from sex and fart jokes to brutally-honest social commentary never fails, though his overall stories are known for being more immature.

Holden McNeil (Ben Affleck) and Banky Edwards (Jason Lee) are lifelong friends and comic book artists who have quickly gained popularity with their comic book series, "Bluntman and Chronic." They meet fellow comic artist Alyssa Jones (Joey Lauren Adams) and Holden immediately falls for her. Everything changes when they are invited to a club and they realize that Alyssa is a lesbian. Holden and Alyssa develop a very close friendship that bothers homophobic Banky immensely. It is obvious Holden loves Alyssa and it is only a matter of time before he must reveal his true feelings.

In a very quick sequence of events we see Holden and Alyssa's friendship becomes like one continuous, and perfect, first date followed by how it effects Holden and Banky's friendship and work. At those moments Smith does a brilliant job at teasing bynever letting the film become too serious, we know a major confrontation is closing in, with saying that, the mood is still very light. That ultimate moment when Holden must reveal his true love is some beautiful sappiness, not forced, the right kind of emotional release we could see happening in real life which makes it work so well.
For the last, close to, half of the film love and friendship is brought to their limits. Holden has the girl, but jealous Banky reveals just one of many shocking moments of Alyssa's past. For once Smith creates characters that we can actually care about. Ben Affleck's performance as Holden still marks one of the best in his career, his role will hit a soft spot for the exhausting amount of men that he is based off of. He falls for the girl, but his fears about her past and desire for their relationship to be perfect causes problems that he is unable to handle. His lovely counterpart, Joey Lauren Adams, plays her challenging role as sexually confused woman looking for love with controlled emotion. Affleck and Adams have a chemistry that is a joy to watch.
Kevin Smith and film go hand-in-hand with Holden McNeil and love. Both have endless determination to reach their desired goal, although lack the maturity needed to reach those goals. Smith has always used his personal thoughts and opinions as a major part in his work, being a self-descriped "nerd" he has used his work to create characters who fit his opinion of himself. It wasn't until Smith got into film that he finally began to live life, just like it wasn't until Holden found real love when he could finally see life in a less innocent way.
Chasing Amy is the film where Smith reached his maturity, none of his films, before or after, have been nearly as serious or honest. With the usual irresistible charm that Smith brings with any film he is involved in. His characters are given dialogue, brilliant, crafted dialogue, that lets them speak their mind and learn a little on the way.  A finale that throws cliched ideals to the dogs becoming a truly tragic film; this portrait of relationships will not be to everyone's taste, some will find it downright depressing. I find Smith's ending fitting and absolutely necessary, it is about time that happy endings take a break and the harsh truths are given their turn. 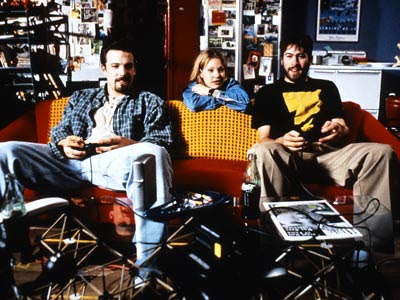 Email ThisBlogThis!Share to TwitterShare to FacebookShare to Pinterest
Labels: 1990s