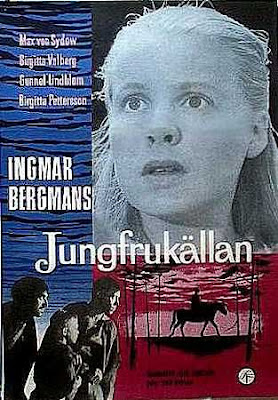 The story is extremely simple: A beautiful virgin girl named Karin (Birgitta Valberg) is on her way to take candles to her church but before she gets to church she is raped and murdered by two herdsmen (Axel Duberg and Tor Isedal) with their younger brother (Ove Porath) and Karin's pregnant foster sister, Ingeri (Gunnel Lindblom), as their horrified audience. Ensuing is Karin's father Tore's (Max von Sydow) vengeance. To have any real discussion about Ingmar Bergman's The Virgin Spring and not go into detail about its plot is a near impossible task; the real brilliance lies in how Bergman makes such a simple story a shocking and powerful work of beauty.

Bergman takes 13th century Sweden and creates an atmosphere which, within its beauty, has a overpowering feeling of dread and ultimately terror. Taking place in a countryside with vast wilderness surrounding makes the atmosphere very peaceful. Sven Nykvist's simplistic camera movements find nice places to perch that let the actors and setting tell us the story. Facial features are just are more heart wrenching than the dialogue could ever hope to be. Bergman is simultaneously at his most simple and effective all at the same time. It is the lingering emotions and symbolism that leave the greatest impact, the violence is gruesome but never gets out of control.

The relationship between the characters is one of the most powerful things to watch during this film; the father and mother's painfully distant relationship, naive and innocent Karin and her pregnant foster sister Ingeri, the herdsmen and their younger brother who is even more innocent than Karin. Another relationship is the relationship between man and nature; like the personification of the smoke being afraid to leave the house because it doesn't know that outside the house their is a vast amount of space to travel and be free. Little moments like that are what make Bergman's films such magnificent wonders.

Like in so many films we see these brutal actions and their consequences through the eyes of the innocent. First, it is the innocent Karin who is beautiful as well as seductive. Her father and mother adore her, she gets everything she wants and desires, seeing the world as a wonderful, painless, place. She feels sorry for the poor, starving, herdsmen. Innocence is destroyed by evil. The herdsmen's younger brother, played by Ove Porath, is a child who watches his brothers, who he looks at as father-figures, rape and murder a young girl. Unlike Karin, he sees the world as a harsh place. Seeing his brothers do their evil deeds has a strong effect of him, but he must keep his feelings hidden. Two children who view the world in completely different ways who both become lost in destroyed morality and also true evil.


Max von Sydow's performance as the heartbroken father in desperate need to avenge his beloved daughters brutal murder is horrifying in that he faces the same problems and asks the same questions that we all ask ourself. Bergman's heated questions about religion in this film stirred up just as much controversy as his depiction of violence. Sydow plays a man who has dedicated his life to religion but when facing the true essence of evil he must question God and his ways. Vengeance is something that would never have crossed his mind before, although when his beloved daughter is murdered he cannot control his anger or need for retribution. What is God's impact on our daily lives? Why is their so much death and despair, and why doesn't God stop it? I could go on all day, unfortunately the answers to those questions will most likely never be found. We must watch this film in our own, distinct, point-of-view and must come to our own conclusions of what we thing is the answer to such universal questions.

Religion and morality has always been an exploration in all of Bergman's films. What causes people to make the decisions that they make, how people's religious beliefs effect their lives and also their morals? All very common themes in any Ingmar Bergman film, The Virgin Spring is one of his most daring in respect to religion. Like Bergman himself the characters' beliefs in the film are never specified, instead we get the broadest of religious classifications while still getting the full effect. The desperation to know God's intentions and, or, methods is very common here, especially for the powerful ending. Bergman caused a lot of controversy with his negative depictions of religion; like the father's desperate pleading to know why he allowed his daughter to be murdered. I felt the ending made all of Bergman's tough questions and doubts about nature and religion settle perfectly. The ending brings back the hope in religion with a very nice supernatural effect.

Watching The Virgin Spring in 1960 must have been an experience that would never be forgotten. At that point in time not many films were showing extensive scenes of violence or questioning religion in such a strong way. Bergman was a well-known and respected director, already having made two of his classics, The Seventh Seal and Wild Strawberries both in 1957. Calling this film personal is such a pointless thing to specify, since all of Bergman's films are personal. Its depiction of violence, the rape scene is now considered one of the most infamous scenes in film history, and religion caused a lot of controversy and hurt Bergman's reputation. But like so many misunderstood films, time has been very kind to this film, it now being considered one of Bergman's finest. The ways its simplicity was used to create such lasting themes make this film one of the most inspirational. For simplicity to be turned to greatness a true master must be behind its making and that has never been more true for this film. 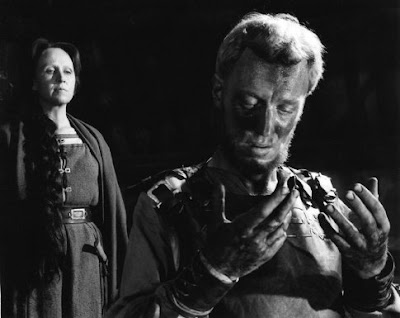 Posted by AdamMoody at 7:03 PM

Email ThisBlogThis!Share to TwitterShare to FacebookShare to Pinterest
Labels: 1960s