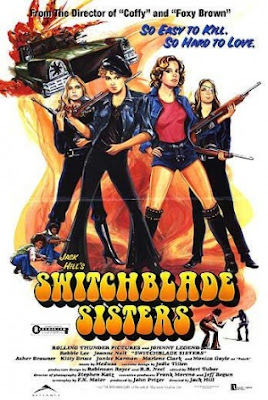 By viewing Jack Hill's Switchblade Sisters we are given a glimpse of the look and feel of exploitation films when they were at their prime. Set during a time where the U.S.'s involvement in the Vietnam war was ending, but American social problems were still at an angry blaze. Youths of that generation were aware of the civil unrest and economic struggles that were keeping the entire country restless. When youths feel their situations are hopeless it is inevitable for them to become angry and settle on momentary pleasures that will take their mind off of their troubled situations. With that it is very gradual transition for youths to become addicted to drugs and involved in crimes of all sorts.

Tough, high-spirited Maggie (Joanne Nail) transfers to a new high school, and immediately is confronted by Lace (Robbie Lee) and her all female gang the Dagger Debs with their partner gang the Silver Daggers. This confrontation leads to the Dagger Debs and Maggie being arrested and taken to a juvenile detention center. At the detention center since Maggie is not apart of a gang she is harassed by the lesbian warden (Kate Murtagh). Lace and the Debs come to her rescue revealing the mutual respect they have for one another. Dominic (Asher Brauner), leader of the Silver Daggers, is immediately interested in Maggie which causes much tension with Lace which leads to problems in the gang.
Being a Quentin Tarantino favorite puts a lot of hype on this little film that achieved so little; its cult status is not very high. Tarantino's films are violent dialogue-driven journeys into worlds of crime and violence. With this film we definitely are shown a crime-filled world with a solid amount of violence, but  the dialogue and acting is just like the film; by thinking it is better than what it really is it seems to try to hard to get us on the same page. Maybe there is something in the midst of this dull film that doesn't know when to quit while it is at least somewhere that Tarantino saw that I didn't, probably not though.
A little taste of what exploitation films can do is all we get with this one; showing a very dramatized portrait of what 70s youths were like and what they had to deal with. Cops are despised, authority only appears when convenient, and violence is very glamorized. None of those risky qualities matter when the film is fun, have fun with the cheapness. Jack Hill proved he can do that with his Pam Grier project, Foxy Brown (1974), then, just one year later, he goes dull. There are still the moments of well executed violence and action, he even threw in some real emotion into the action. When Maggie plans an attack on rival gang leader, Crabs (Chase Newhart), a major shootout happens leading to some satisfyingly emotional departures.
There is far too much seriousness in this film that should never have let the thought of itself being serious cross its mind. Jack Hill goes out of his way at trying to make us feel emotionally connected to what happens to his characters, I could have cared less who lived or died, I just wanted some confirmation that someone would die. Yes, that sounds very morbid, but there isn't much taste in these kind of films, so I do not feel obligated to have tasteful expectations or hopes. I was looking forward to some extreme gore, sleazy characters, and some mindless fun. Instead my patience was strained while my gore-o-meter lever barely hit 5. Hill completely fails at working to his own level, he tries to do so much with something that isn't much.
How can a 70s exploitation film be good without throwing in some African-American extremists? When Maggie and the newly formed all female gang the Jezebels need help getting rid of Krabs' gang, she turns to Muff (Marlene Clark) and her all female African-American gang. Like all its desperate attempts to have gripping social commentary the inclusion of these extremists seems very forced and unfitting. Teenaged girls mixed with politically smart and militarily armed extremists is a match of the most...extreme. When Muff's gang's armored-car turns the corner and the women inside start unloading automatic machine-guns into the streets I realized how nice it would have been for them to have appeared sooner and had a more lengthy role. No matter how forced their parts in the plot seemed, their automatic machine-guns and sassy attitudes were a fun addition.
Switchblade Sister's plot sets it up for nothing but a wild, unbalanced, ride, and that is what it just what it turns out to be. Wild at times, eventless just as much, Switchblade Sisters is weak and not nearly as daring as so many other exploitation films of the 70s were willing to be. A tragic love story forcefully thrown into violent gang drama that is about as good a combination as diet pills with a Big Mac. A mildly interesting, but forcibly daring, plot with the look of a classic exploitation film with secure this film a cult following, though looks don't go far here. Cheap acting is a given, but a standout performance may just have been a saving grace for a very forgettable film. Characters are created that we are suppose to care about and relate to, but put in circumstances and situations that have not one shed of realism to them. How it ends leaves the perfect imprint of what the rest of the film was like; tried too hard and doesn't know when to quit. 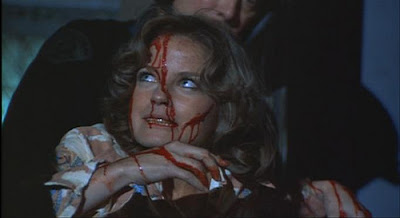 Posted by AdamMoody at 4:17 PM

Email ThisBlogThis!Share to TwitterShare to FacebookShare to Pinterest
Labels: 1970s