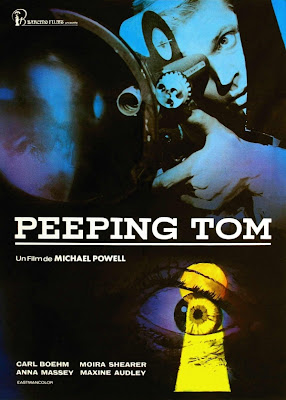 While doing some research on Michael Powell's controversial experimental horror film, Peeping Tom (1960), I realized that this here is one of those timeless films that can be interpreted in endless ways, making it a film lover's delight. Director Martin Scorsese says that it is like Federico Fellini's 8 1/2 because it says everything that can be said about filmmaking and the process of dealing with a film, this film being a violating experience. I can imagine there being groups of film students talking for hours about all the different things going on in this film, all the conflicting themes and visual tricks that creating such a shocking atmosphere. And isn't that why we love films? Well if you ask a modern audience the answers will be much more reserved, but there will always be that group who is always looking for those deeper meanings in every film.

Our guide through the darkness of mind and creation is Mark Lewis (Carl Boehm), he is a shy, detached, young man and the focus operator on a film crew who aspires to become a filmmaker himself. Throughout the entire film he is always holding a camera, he is working on a "documentary" which shows the horrific fear of his victims as the blade attacked to his camera comes closer and closer. We see his stalking through his camera's point of view with crosshairs that make it resemble a sniper rifle with Mark as the patient hunter.

Maxine Audley's performance as Helen's blind mother is brief, while being the second deepest performance behind only Carl Boehm's shocking and wonderfully manipulative performance as Mark. Her blindness has made her a pro at reading people's movements and talking styles. Saying at one point that he walks "stealthy" and to never trust anyone who walks quietly. She is able to read Mark almost page by page (no pun intended), but her blindness keeps her from understanding just how sick he really is.

Young sweet-natured Helen (Anna Massey) befriends Mark part out of pity, but mostly out of youthful curiosity. On their first meeting, which happens to be her 21st birthday, as a birthday gift Mark shows her videos that his father made of him. Mark's father (played by Powell himself) was a psychologist who studied fear and the nervous system's reaction to different kinds of fear. Using his son as his guinea pig by filming every moment of his child's life and even going as far to film him while he was visiting his mother who was on her deathbed. Helen is shocked by what Mark has shown her, instead of running away she uses it as inspiration for a book about a magic camera. By revealing that we get a more sympathetic view of Mark; we are not meant to sympathize with Mark, but more so understand the very gradual formation of his insanity.

Michael Powell is one of the most influential English director to ever live, that simple. He is mostly known for his now legendary partnership with Emeric Pressburger, they called their partnership "The Archers." Their collaborations include many films that are considered some of the greatest British films ever made like 49th Parallel (1941), Life and Death of Colonel Blimp (1943) and their post-war films Black Narcissus (1947) and The Red Shoes (1948). Peeping Tom was one of his few films that Pressburger did not contribute to, and it is also the film that is credited with destroying his career. Loathed for its sexual content and shocking content. Today it is viewed as one of the most important films ever made. Daring for its intense study of the methods of a psychopath and revolutionary for Powell's anarchic camera tricks.

Is it a character study or a viewer experience? I must give the cowardly answer and say that it is both; We are taken on a ride through anarchic filmmaking, Powell's camera is seems to be constantly searching for something, for some kind of answers. There is a overwhelming amount of madness going. The scene where Mark arranges his set-in friend Vivian (Moira Shearer) to come work at the studio after it closes is a perfect example of the madness of both the film and the character. Through Mark's character we are taken through each realm of his madness, along with seeing his character grow then in repress all over again, After already getting to know Mark's character a bit we can already tell what is going to happen, but the scene seems so much more detailed and thought out then it needed to be. It is very easy to find ways to compare Mr. Powell and Mark, his psychotic creation. Mark wants to be a filmmaker so he makes a film about what he knows best, fear. Powell who was considered one of the greatest directors in the world and almost every film he had ever made was widely acclaimed, so with this film he was creating something new which in a sense could be him exploring becoming a filmmaker all over again.

The tactic of showing showing how the police naively try to find a killer who the will never understand. They view their suspect as nothing but a "lunatic" which makes the way we view him all the more important. As they close in they have no idea who, or what, they are dealing with. Going through their usual routine like solving a murder case is a daily occurrence, Mark is able to twist and manipulate them like they are the long awaited toys of his childhood. We don't view him as a motiveless psycho who gets off on murdering women, Mark is a person who was made a sick mind.

Released the same year as Alfred Hithcock's shocking film, Psycho. Two very different looks at a psychopathic killer that have such similarities. Using their cameras to sadistically tease us with implications of violence while never given us the satisfaction of seeing the act, leaving our minds to toy with us as they please. Both directors create a terrifying character who are epitome of terror; we are given the cause (just cause, even) for their ways a emotionally traumatized qualities. Norman Bates and Mark Lewis walk together on a long bridge of insanity.

Peeping Tom has aged like high-class wine. Viewing it today after almost every aspect of the film has inspired future filmmakers, and even entire films, is a pleasure I have very rarely been treated to. It doesn't matter how you view it as long as you understand just how "ahead-of-its-time" it really is. Saying that couldn't be any more cliche, but sometimes even cliches can be important. Mr. Powell's career may have been ruined by this daring film, but like Orson Welles, Jean-Pierre Melville, and even the late and oh so terrible Ed Wood, his legacy continues to grow with time. Film lovers and filmmakers alike have dub this film as a "must-see" with the likes of the perennial classics. It's subject matter and methods still are not for everyone's liking (like so many other important films), but you must respect its creation (that is the only way to describe it, a creation). 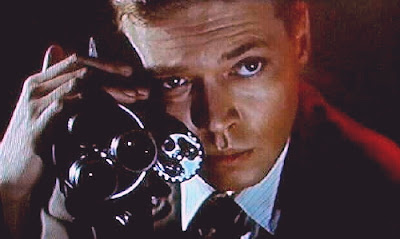 Email ThisBlogThis!Share to TwitterShare to FacebookShare to Pinterest
Labels: 1960s