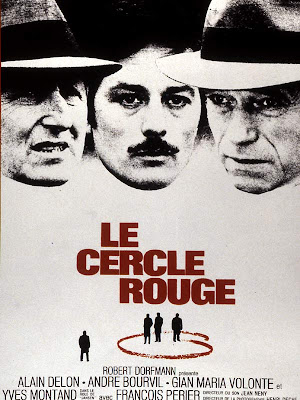 Jean-Pierre Melville creates a new world of crime in each of his films. His worlds are controlled by criminals who view their work like a corrupt politician desperate to not get caught while working right in broad daylight. Even an off-road coffee shop looks as beautiful as many fine-dinning restaurants anywhere else. Films like Le Doulos (1962), Le Samourai (1967), and now with Le Cercle Rouge make life look like one endless glamorous moment, even with crime and murder as a key element. I would be surprised if Melville ever considered the making of any of his films actual work. Everything always flows so easily, when I watched one of his films it makes me feel like I could make something just like it, but as we all know he was a master. Le Cercle Rouge is not powered by any one performance and Melville has created more lasting characters in his previous films, but what is does here is make characters that work perfectly with a plot that shows him reach plotting greatness.

There is plenty of build up to the much anticipated heist sequence that has become quite legendary. First we are gradually introduced to the players in this crime game with whom we get to know their tendencies and the way they view their work.  At the film's opening we see straight-headed intimidator Commassaire Mattei (Andre Bourvil) escorting instinctive criminal, Vogel (Gian Maria Volonte). Then there is quiet code-driven Corey (Alain Delon), who is the creative genius of the film. By pure chance and uncontrollable events these men's lives come together. Corey is released from prison, that same day Vogel makes a great escape from Mattei, showing just how instinctive he is, fleeing the countryside from an army of pursuing policeman. By chance he arrives at the same diner that Corey is eating at and hides in the trunk of his car.
Corey and Vogel quickly warm up to each other with their own reserved form of mutual respect, but since Corey has taken up the run-away criminal, he now has Mattei on his back. Now with a desperate accomplice, Corey is able to bring back an idea for a major heist that was given to him by a former prison guard. As added help Vogel enlists formed cop and battling alcoholic, Jansen (Yves Montand). These three men are professional in aspect of this plan, Vogel says he isn't a professional criminal, but he isn't fooling anyone.
Surprisingly it isn't any of the criminals whose performance I found the strongest, in fact it was Andre Yourvil's performance as hard-nosed cop Mattei. A menacing man who doesn't think twice about abusing people's civil rights to get them to inform for him. Being a career-policeman, and dealing with so many criminals have left their mark on him emotionally and professionally, along with having a superior who says that "every man is guilty" with the elaboration "men are born innocent, but it doesn't last"  Like in Le Samourai (1967), Alain Delon has yet another very quiet role that relies on his presence and raw acting abilities. With him in a similar role is Gian Maria Volonte who gives us one of the finer performances of his career.
Melville really lets his talents do all the work. Revealing just enough to momentarily satisfy us, while leaving us expecting more, then taking his sweet time to give us that ultimate satisfaction. His film Le Doulos (1962) was a very character and dialogue-driven film that relied heavily on the deceptive performances of Jean-Paul Belmondo and Serge Reggiani. There is not much dialogue in this film, and rightfully so. Here is a plot that would have made a great silent film, what becomes its best qualities are the ways it shows the most powerful scenes in reserved ways. Take the scene where Corey is taken deep in the woods and put at gunpoint by two cops, one he had beaten up earlier, then right before they shoot him Vogel, who was still in the trunk, appears. At last, in an obviously professional manner,  Vogel shoots one cop then uses that cop's gun to kill the other. There we know that Vogel has paid his dues to Corey, but instead of saying "hey, we are even" they both say nothing. These men know each others type, they understand each other and watching there interaction does much more than a quotable line.
Once the chains-of-motion start running on the heist nothing can stop it. There are no stops or pauses, the professionals do their preparation work and get to business. When I realized just how long the heist sequence takes -- roughly thirty minutes -- I was surprised, it is so perfectly paced along with being meticulously detailed. From Corey and Vogel's journey through the buildings to the site and ending with each man's un-rushed, even though the alarm is set off, departure.
The title is taken from a falsified epigraph said to be by Buddha, when in fact it was created by Melville himself. Pretty much says that when men are, knowingly, to meet one day they will come together in a red circle. There are endless ways that could be interpreted with even more endless ways that it could have been shown in the powerful finale of Le Cercle Rouge. Straining your mind too much to figure out just what Melville meant or what he intended is pointless; Melville was a man with a mind to create ideas and stories along with the fantastic ability to portray those ideas and stories in film. If he wasn't a filmmaker he definitely would have made a great author. A heart attack cut his life tragically short in 1973, but his legacy will live on with his films that seem to get even better with time.
Le Cercle Rouge is one of Melville's final films and one his greatest. Featuring all the usuals; noirish narrative style, colorful characters, even if reserved, and dialogue to be remembered even if it doesn't control the flow like it did in his earlier films. I will definitely say that his plot structure is something to be revered, and it truly is. If I was to be a criminal I would want Melville to be my guide and watchful eyes,  he was able to create a world with such unique methods and techniques. With Le Cercle Rouge, Melville once again is able to use the qualities that have made him one of the most lauded French directors to ever live, and use them all in some of his most audacious forms to make a crime film that sucks us into its world. 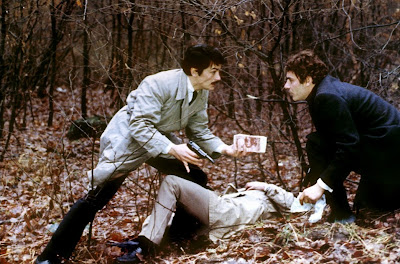 Posted by AdamMoody at 9:38 PM

Email ThisBlogThis!Share to TwitterShare to FacebookShare to Pinterest
Labels: 1970s